Bluenose Marathon 2011-Girls on the Run! 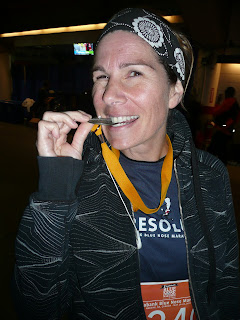 Last year I attended the
Bluenose Marathon in Halifax Nova Scotia to cheer on my youngest daughter Lauren as she ran the half-marathon event. I had never attended before and because this was her 3rd time participating, that I would finally make the trip. I had never been to anything like it before and was overwhelmed at the caliber of the event AND the tremendous positive energy surrounding it. Droves of people turned out to cheer on the runners ( a cornucopia of all ages and abilities) and one couldn't help but get caught up in it all. I cheered as folks in all the events crossed the finish line and shed some tears as my daughter completed her run. I decided then and there that I'd run the next year.

Let me tell you, I  was no runner and only minimally athletic but I stuck to my guns and started training in late December, running a couple times a week and then stopped when the weather stopped co-operating. I took it back up in March, determined as I was, and it was a slow process, but finally was able to run 5km without stopping or walking by the end of April. Not bad for a 47year old ex-smoker. 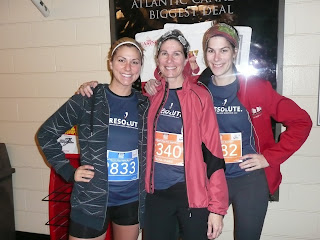 Fast forward to 2011 and you can see me above with my medal for completing the 5km event. My youngest daughter ran the half-marathon event, my oldest daughter Allison ran the 5km with me and we all came in UNDER our goal times! (We three are here to the right)

It feels so good to accomplish something I never imagined I'd do!

Next year:  Bluenose Marathon 2012 10km event!
Hope to see some of you there!

When She Was Bad is only weeks away! Stay tuned for some more sneak peaks!
Posted by Teena Marie Fancey at 7:40 AM