Thought I'd show you  a bit of the journey taken to the finished piece I call The F-word.
It started with a poem that I wrote, a vintage McCall's magazine circa 1946 AND my love (bad habit) of using profanity.
My love of using the f-word contributed to forming that idea and writing the poem. The poem was written to help form the visual idea. I love to swear for effect. Timing is everything as is knowing your audience ( not everyone is open to bad language, I've discovered. Imagine!), and those who know me well, know that I can swear like a sailor!
The magazine is one of numerous vintage magazines in my collection. Who can resist gazing at that carefree-looking girl, hair blowing in the wind, blue sky filling up the frame behind her, sunglasses reflecting the photographer who was capturing her for the August cover.
What was she really thinking?
Now...scroll down..... 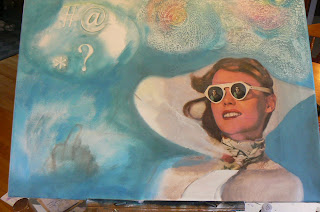 ...as I was trying to form this idea, I thought about how one could deliver an F-bomb in an airy, girly, American Dreamy fashion - hence the heavy bodied acrylic medium imprinted with an old lace doily adding texture to the sky backdrop...it doesn't get more feminine than a doily, does it?

Originally I wanted the action of 'flipping the bird' to be fairly pronounced...but wait! it felt too crass, so it was painted out. Then I thought a speech bubble filled with:  #%$@! That would express a mighty stream of expletives. Naw, I thought, not lady-like enough so I painted that out too...scroll down....

In the end, bubbles did nicely. 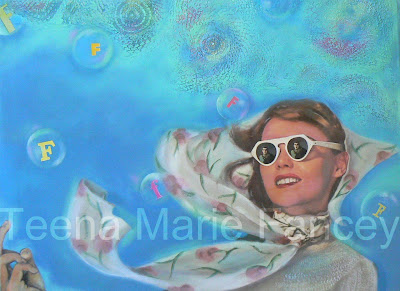 F-bombs floating delicately  through the air and maybe silently but wetly popping and releasing their message like spit in the eye...and the action of flipping the bird is done so breezily- subtle but NOT to be missed! The gentleman reflected in her sunglasses dropped his camera he was so startled taken off-guard!

The F-word
Such language! So gauche!

Someone wash out her mouth!
How dare she? And really, I never!
That she’s said such a word

With such gusto and verve
With a smile on her lips, looking clever
Such brashness and cheek
Just to hear a girl speak
Such a foul and outragEous curse
Why, hasn’t she heard?
Such a word is reserved
For guttersnipes, sailors and worse!

“The F-word”, she states
“Has uses so great
They’re really too many to count.
Let me demonstrate,
How it can accentuate
One’s point perfectly so, should you want.

We can use it in place
Of the word fornicate,
For that term doesn’t sound at all right
As a noun or a verb
To say the F-word
Makes me wish I could do it all night

To guarantee a commotion
When so filled with emotion
In a sentence, I’ll just drop it in
As a bold adjective
The F-word will give
Any statement some vigor and vim

When push comes to shove
Take courage my love

And know there’s a perfect reply
When you need to be heard
Try this use of the word,
Say, “Fuck off!”

And you’ll feel satisfied.”
The F-Word ** is one of 20 pieces (some with poetry and rhymes) featured in my new exhibit
"When She Was Bad". The show is now open for viewing and runs until July 22nd, 2011 at the Cape Breton Centre for Craft and Design 322 Charlotte St. Sydney, NS.
**SOLD**
Posted by Teena Marie Fancey at 5:59 PM