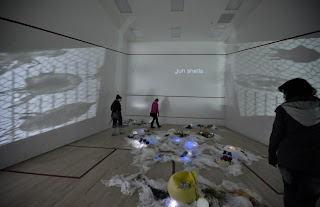 Lumiere 2011 was a huge success. Not bad for it's inaugural year, I must say. That was thanks to the fab organizers and artists who participated and made it so great. And for residents of CB and surrounding areas for coming out despite the rain!

Katherine Scott and I worked very hard on making our project happen and it really paid off. We had a very popular and well attended installation.
We transformed a squash court at the YMCA into an underwater world of plastics. We made jellyfish from plastic bottles and food containers and hung them on a fishing net, then projected their shadows on the walls of the court. Also projected was a message that started with a haiku and then listed the materials used in creating our underwater world. The list included plastic shotgun shells, plastic bottles, bottle caps, containers, and bait bags, lobster bands, nylon rope and other plastic refuse collected on local beaches. As well as a few startling facts about the peril of marine life and our planet's consumption and careless disposal of plastics. 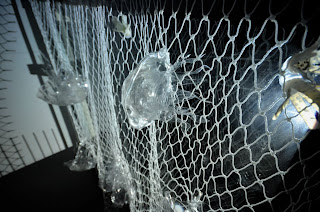 The public was invited in to walk around the space which was filled with music that felt a bit funereal and evoked the sounds one might hear if submerged underwater. Then they could take their time and read the message and look at all the materials transformed to make creatures and corals.

We got a lot of positive comments from adults and kids alike. We hope all enjoyed and that we helped to not only pass on a message, but that we made art fun and approachable for all.

Thank you to all who supported us and came out to enjoy Lumiere 2011. Hope to see you next year!!!
*photographs by Robert Doublett from the album Lumiere on the CBC Cape Breton-Mainstreet Facebook site. Thanks also to CBC Cape Breton for your coverage and support! Cheers Wendy et al!
Posted by Teena Marie Fancey at 7:02 AM